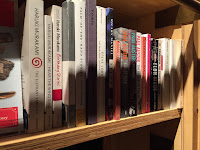 I've not written any post  for a month. It is one-twelve of a year, that means I have let quite a large amount of time slip by without much reading and writing. The thing is when you go somewhere cold and snowy for your holidays, you cannot lug along too many books as they weigh on your luggage that is already packed with warm clothing and if you do not happen to like or be able to immerse yourself in the couple of books you have brought on your trip, you are doomed.I should perhaps have brought along my iPad but I prefer holding a book.  My elder daughter and I  stayed at a Book and Bed hostel for one night  and I  was quite tempted to  purchase the English fictions they put together in a bag.  I knew I would have trouble managing my big suitcase so I refrained. It was definitely a cool experience staying inside a bookshelf amongst the books at Book and Bed click . 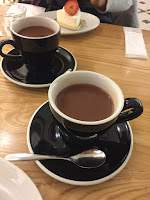 Before my vacation, I started reading  Autumn by Ali Smith. I decided not to bring a book that I have read more than half way,  so I left it behind and only resumed reading it when I got back. Ali Smith is a terrific writer. Here is a passage from Autumn.

‘Elizabeth sits at the kitchen table while her mother plays her an old episode of The Golden Gavel to show her what they expect. Meanwhile she thinks about her trip here, most of all about the Spanish couple in the taxi queue at the station. 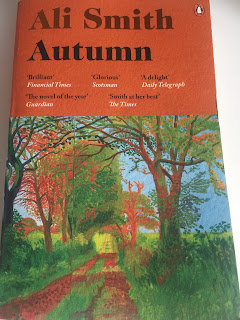 They’d clearly just arrived here on holiday, their luggage round their feet. The people behind them in the queue shouted at them. What they showed at them was to go home.
This isn’t Europe, they shouted. Go back to Europe.
The people standing in front of the Spanish people in the taxi queue were nice;they tried to defuse it by letting the Spanish people take the next taxi. All the same Elisabeth sensed that what was happening in that one passing incident was a fraction of something volcanic.

Ali Smith’s prose is artful yet purposeful. The message it gives across is effective. She is clever at describing  the process on how Elisabeth gets her passport renewed. The story begins with Elisabeth waiting at the Post Office as she wants to get the Post Office to certify that her papers are in order before she posts it to the Passport Office to renew her passport . The service is supposed to make things move quicker if you get your form filled out with your old passport and your new photographs, and had a certified Post Office official check it through before you send it to the Passport Office. After a long wait, she is told by the Post Office  man that her face is the wrong size as she does not follow the instructions about filling the facial frame. The correct size should be between 29 millimetres and 34 millimetres and her head falls short by 5 millimetres. She is advised to go to Snappy Snaps instead of a photo booth. The next time she returns to the Post Office with the new Photo Booth shots , in which her face is the right size. The woman who attends to her tells her that there may be a problem with her photographs as they don’t meet the necessary stipulation in that her hair is touching the face and her eyes do not sit with the permissible regularity inside the shaded area. Again she is advised to go to Snappy Snaps. Elisabeth tells the woman, “Just send these photos to the Passport Office. I’ll take the risk. I think they’ll be okay.”

Ali Smith’s humour is wry. Her writing is playful and sensitive.

‘It is a Wednesday, just past midsummer. Elisabeth Demand - thirty-two years old, no-fixed-hours casual contract junior lecturer at a university in London, living the dream, her mother says, and she is, if the dream means having no job security and almost everything being too expensive to do and that you’re still in the same rented flat you had when you were a student over a decade ago - has gone to the main Post Office in the town nearest the village her mother now lives in, to do Check & Send with her passport form.’

Autumn written by Ali Smith is about an unlikely friendship between Elisabeth Demand , a thirty-two-year- old and Daniel Gluck, 101 years old, her beloved next door neighbour and confidant when she was a child. Gluck is now lying in comatose in  an assisted care facility and Elisabeth poses as his relation and visit him there. Gluck is the one who introduced her to “arty art” and taught her to always be reading a book.

It was April 1993, Elisabeth was eight years old. She told her mother that she had a school project and she was required to find out about her neighbour.  ‘ It’s about history and being neighbours, Elisabeth said.’ Her mother reluctantly brought her to get  acquainted with Mr Gluck, their next door  neighbour then.

He tells her that he thinks her surname is originally French. He thinks it comes from the French words de and monde, put together, they mean ‘ of the world’, 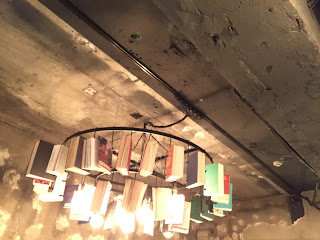 ‘ Of the world, or in the world, I think so , yes, he said. It might also mean of the people. Like Abraham Lincoln said. Of the people, by the people , for the people.’
‘ It means I’m lucky and happy.’ Mr Gluck told Elisabeth the meaning of Gluck. The neighbour then said to her,
‘ The Lifelong friends. We sometimes wait a lifetime for them.’

Decades later, Elisabeth finds herself at a time when there will be a sea of change. It is post Brexit. The village is in a sullen state…... 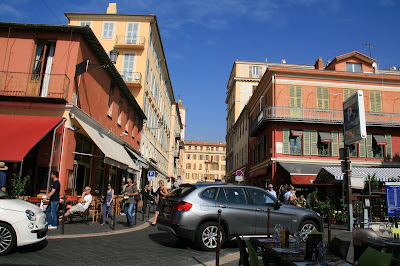