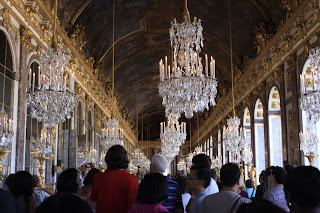 Looking at the luxurious palace of Versailles of today, what actually happened during the reign  of the Bourbons is beyond what you could possibly imagine…If only the walls could talk.
Voila, a captivating and comprehensive book written by Will Bashor that explores the intimate life of Marie Antoinette and transports you to the hedonistic world at Versailles.
A Book Review

Will Bashor
is the author of the award-winning
Marie Antoinette’s Head: The Royal Hairdresser, the Queen, and the Revolution and
Marie Antoinette’s Darkest Days: Prisoner No. 280 in the Conciergerie.
He holds a doctorate in international studies
from the American Graduate School in Paris
and is professor of global issues at Franklin University.
He lives in Barcelona, Spain.
Visit his website, or click

Marie Antoinette’s World is a historical non-fiction full of fascinating facts about the intrigue, excesses and sexual profligacy surrounding the life of the Bourbon kings from Louis XIII to Louis V and the expansion of  Versailles from a simple hunting lodge to the luxurious palace. The chapters are methodically set out. Will Bashor has given a detailed account of Marie Antoinette’s intimate life and vivid characterizations of her liaisons and you cannot help being drawn to the court intrigue and wonder how this monarch ever reigned at all.

During Louis XV reign, a marriage was arranged for Maria Antoinette by her ambitious mother, Maria Teresa for political reasons and to maintain an alliance between Austria and France. Marie Antoinette was born Maria Antonio Josepha Johanna von Habsburg Lothringen, the fifteenth and second youngest child of the Roman Holy Emperor Francis I and the Empress Maria Theresa of Austria. She was born on Le Jour des Morts (known as the Day of the Dead in France ). The king and queen of Portugal were chosen as her godparents. On the day that the princess was born, Lisbon was hit by an earthquake and at the very moment of her birth, her godparents were fleeing their crumbling palace. As history now stands, her life would appear ill-omened from the beginning.

Her father died when she was ten years old. Empress Maria Theresa had single-handedly raised all her children. The princess was not only deprived of sufficient paternal guidance but her father’s well-known infidelity might also have impacted her psyche. Marie Antoinette and her siblings close to her age were brought up by governesses and her education was much neglected. She had poor handwriting and her language skills were lacking.

Since the reign of Louis XIV, life at Versailles had been a public affair rather than a private one. On the morning of April 21, 1770, fourteen-year-old Marie Antoinette was thrusted into the ‘vicious atmosphere of the court of Versailles with little protection’ by virtue of her nuptial with Dauphin Louis-Auguste, the grandchild of Louis XV.

When the Austrian princess became the dauphine of France, she had lacked guidance in the austere codes of court behaviour as the queen had long passed away and the new mistress of King Louis XV could not help her. Moreover, due to her frivolous nature and lively spirit, Marie Antoinette did not take well to the protocol. “She broke rules of etiquettes,  rode horses , instead of wearing skirts and riding sidesaddle, she dressed in the manner of men in breeches. The balls, the operas, the horseracing Sleigh rides in the snow, nocturnal walks in the gardens of Versailles without the king continued in the first years of the reign.” Marie Antoinette was surrounded by bad influence in the land of iniquity and debauchery where there had been excessive expense from the previous two reigns. Unlike his predecessors, King Louis XVI was far from spending his life in debauchery and was frugal but he was cold and more interested in food, drinks , hunting and locks and bolts. Their marriage took seven years to be consummated and twenty-two- year-old Marie Antoinette finally gave birth to  Princess Marie- Térese Charlotte, their only child who lived past adulthood and till seventy-two years old.

After four years at the Versailles, the eighteen-year-old dauphine became the queen of France on the death of King Louis XV. In her letter to her mother, she wrote ‘ M. Dauphin and I are terrified to reign so young’. It is noted that the dauphin had very little chance of an education that would have prepared him for the arduous task ahead. The author wrote, ‘ Not only the dauphin’s education was neglected, but also no care was taken to cultivate his taste or to polish his manners’.  Louis XVI was the August husband, noble but emotionally and physically unavailable to the young and beautiful Marie Antoinette. Her behaviour was regarded as unbefitting for a queen due to her questionable entourage and her extravagance. Louis XVI’s upbringing and his inability to think and decide for himself or his subjects ultimately led to the downfall of  him and his queen. As revolution was on the horizon, pamphlets that contained libellous and malicious gossips calculated to defame the queen were printed and distributed.

What is fiction, what is truth? The pamphlets served as propaganda against the queen and these pamphlets were used for evidence at the trial when the queen was prosecuted. After spending few years under house arrest, Marie Antoinette was sent to the guillotine at the age of thirty-seven and executed on 16 October 1793. Louis XVI was executed in early 1793.

Marie Antoinette’s World is absolutely befitting for the title of the book.

As a bibliophile, the author had included an interesting fact about Marie Antoinette’s  collection of more than two thousand works of which 536 volumes were novels and 408 were plays. She had a bibliothèque in the palace and a boudoir in the Petit Trianon, the bibliothèque’s books were more prestigious and honourable but the books in the boudoir were of a  more frivolous and libertine nature. But seriously, who is the judge for what is frivolous and what is prestigious? Apart from the library, the author also gave us the reasons for the usage of fans held by the women, the secret language of the queen’s fan and the analysis of Marie Antoinette’s handwriting by graphologists.
******************************
Here is an excerpt from Marie Antoinette’s World written by Will Bashor.
À SAVOIR
Marie Antoinette’s Handwriting (1770-1774)
Louis-Auguste and Marie Antoinette were married at Versailles on May 16, 1770, and after the religious ceremony was concluded, Louis XV signed the marriage contract, followed by his blood relations in order of precedence.
Louis XV's signature was large and well-practiced. Dauphin Louis-Auguste signed next in a thin but accurate manner and then handed the pen to his new wife, who was to sign third. She was able to get through "Marie" with no problem, but from that point onward the writing became awkward and skewed. The "J" in Josepha became a huge blot and she wrote her name Jeanne without an "e" as Janne. She was no doubt relieved to hand the pen to her new brother-in-law, the Comte de Provence.
According to the graphologist, Marie Antoinette's signature on the marriage contract was written hastily. The script size is small, and the left tendencies of the lower zone show passive sympathy and a bit of narcissism. The signature is rather disconnected and may show self-reliance and individualism. The leanness in the upper zone may also suggest mental clarity and an analytical mind.

A "bit of narcissism" would certainly have been possible, considering the venue of Marie Antoinette's wedding. It was a private affair in Louis XIV's chapel at Versailles, where only nobles of high descent were granted access and spring sunshine "pierced the stained-glass windows, embroidered brocades, and shimmering silks, all the glories of those set apart by privilege and wealth."
After living at Versailles for almost two months, Marie Antoinette wrote to her mother, signing "La plus soumise fille Antoinette" or "The most obedient daughter Antoinette."

According to the graphologist:
·      This signature has a garland nature and leans slightly to the right. The initial enrollment in the letter "A" coupled with the lower loop in the letter "F" indicates shrewdness and opportunism.
·      This signature has qualities that indicates the Szondian factor "hy" due to its garland connections, uneven base line, and its over connected nature. These factors suggest the writer enjoys the finer things in life.
·      The signature started out with good spacing, but the letters were soon meshed together towards the end. This may have simply been due to the writer running out of space. However, the direction of lines remained consistent (descending nature). This points to pessimism in the writer's outlook on life.
Whether Marie Antoinette was shrewd and opportunistic at such a young age is debatable, but after two months in the etiquette-ridden chambers of Versailles, it might have been possible for her outlook to be pessimistic, especially considering the inability of her husband to "please" her.

Whether you are a history buff or a francophile, Marie Antoinette’s World written by Will Bashor makes an interesting, informative and enlightening read indeed.global giveaway